Tony is sleeping it off under a chair in the lounge next to a upturned bottle of lucazade and left over pieces of cake.

Tony lies on a tiny deck lounger, tiny ray bans over his eyes blocking out the morning sun. Todd is bright and up and about and getting busy for the day.

Tony looks over his glasses at Todd then collapses back onto the lounger. Not before taking a sip of lucazade.

Tony: Argh I feel like shit.
Todd: Really I feel fine.
Tony: How? You drank way more than me.
Todd: yeah but you’re a lightweight. Besides I don’t get hangovers.
Tony: Fuck off.
Todd: It’s true. I can drink and drink and do not get a hangover.
Tony: Ever.
Todd: Not ever.
Tony: Not once.
Todd: Not even.
Tony: But you can get drunk?
Todd: Of course.
Tony: But never hungover?

Tony sees that Todds straightening his leg hairs and then Todd sticks his proboscis out and puts a centre parting into the hairs on that.

Todd: I said, so what we gunna do today?
Tony: I am going to lie here vomit a little then vomit some more and probably round off my day with a little more vomiting.
Todd: Jesus man we’re flies that’s ALL we do.
TOny: Yeah but I won’t be eating any of it.
Todd: That’s so disgusting and a waste.
TOny: So what are you doing?
Todd: Well I met this cute little bug called shaniqua. And we’re going for a bite. I say she’s little but actually she a little on the heavy side if you know what I mean.
Tony: Tubby chaser.
Todd: Exactly.
Tony: You meet her at the party? cause I gotta tell you man those lady bugs were nasty.

Todd: Did we just become black?
Tony: I think it’s the writer. I think he doesn’t really have a clear idea who we are or what’s our motivation.
Todd: The writer?
Tony: Yeah. You realise we’re simply the manifestations of some guy who doesn’t get out much, has no girlfriend except for the Internet and has delusions of being the next Aaron Sorkin.
Todd: With this writing.?
Tony: Yeah I know right?

Todd: So if I’m the creation of this guy and you are too then the whole world…?
Tony: Is a construct. Yes. Doesn’t truly exist.

Todd: Shaniqua?
Tony: Yep.
Todd: What happens when this “writer” croaks.
Tony: I don’t know. Do we die? Are we left in some sort of limbo? Just words on a page? Or do we live on in the imaginations of the readers? Who may go on and write their own stories. The question is then is it truly our world? Are they expanding upon ours or are they merely facsimiles living in a facsimile. Or do we truly exist between the spaces between words and the pen is a portal to our world.

Todd isn’t so sure. He gets down and prays.

Tony: What you doing?
Todd: I’m not entirely sure but I think I’m praying.
Tony: Are you doing this Todd? Or is it the writer?
Todd: I can’t tell. I mean I’m doing it and I assume it’s me but what if it’s just the writer typing instructions that I interpret as my own actions? Does that mean free will is an illusion? Fuck. Now my head hurts.

Tony looks out of the corner of his eye so not to miss a thing whilst taking a another sip of lucazade. Todd’s on his knee and he looks up to the heavens and starts..

Todd: Dear writer. Heavenly being who created all that we survey and probably a lot more if You had fleshed out our back stories properly.. Which, by the way, I thank you for my cool backstory. I Know you’re not entirely sure about Tony. Is he gay etc etc…
Tony: Hey!
Todd: … But great work anyway. I know we don’t normal talk and you probably get a lot of this but I thought I would ask anyway. Dear writer…Heavenly Father, Please allow me to fourth base tonight and give Shaniquaa a cunt like a bucket.

Tony sprays out his lucazade and nearly chokes on the back wash.

Tony: You can’t say that?
Todd: Why not?
Tony: For a start it’s sexist. It totally disrespectful. The word itself is really offensive and lastly I’m just fucking with you.
Todd: Fuck off!
Tony: Yeah I’m just messing with you.
Todd: Really?
Tony: Really.
Todd: Really?
Tony: I mean you’ve got to be a pretty sick individual to think up a world like this right?
Todd: So I’m real?
Tony: Yes.
Todd: The world is real?
Tony: Yes
Todd: Shaniqua?
Tony: Is real.

Todd clasps his hand together and looks to the sky again and gives it a knowing look.

Todd: You know what I’m saying.
Tony: TODD!
Todd: I aint’ taking any chances.. Besides how do you know the writer isn’t real?
Tony: Cause I just made him up.
Todd: Blasphemy!
Tony: How can it be blasphemy?
Todd: You deny the existence of the great writer. I can’t believe you man.
Tony: I just made up the whole thing.
Todd: Ah I’m just messing with you. You’re too easy.

Tony: Really Todd, you look exactly the same.
Todd: Awesome, just the look I was going for. Listen when you’re done vomiting come meet us at the club after 10. I want you to check out Shaniqua before… You know… We go off and biff.
Tony: Why do you need my opinion?
Todd: We’re friends Tony. That’s what friends do.

Todd: I will probably ignore you anyway.
Tony: Why would you do that?
Todd: You’re job as my friend, is to try and talk me out of doing some stupid shit and my job as your friend, is to do that stupid shit allowing us the opportunity to have a laugh about it afterwards over a cold shandy and bond thus cementing our friendship but mainly giving me an opportunity to remind you of how much poontang I am getting and you’re not.
Tony: That last bit’s a little one sided don’t you think?
Todd: Relationship power plays my friend. Life is a harsh mistress and she’s tired of seeing you whack off.
Tony: Yeah.
Todd: She’s got a friend.
Tony: No she pretty?
Todd: No but she is blind. Literally blind. She flew into one of those blue zappers. Burned out her retinas. And she’s skinny. Which is how you like em. Which is all fucking weird if you ask me. Big abdomen thats what you want. Anyway. 10pm see you at the club. You’re my wingman.
Tony: But I feel like shit…
Todd: No excuses! I need you buddy. Shaniqua’s a pastors daughter and I ain’t getting anywhere unless her friend gets some too.
Tony: What’s her name.
Todd: I forget… Tiny little…
Tony: bBain. Got it.
Todd: Tony.
Tony: Ok Todd. I’ll go.
Todd: Great I am so sure that you and her friend will get on like our people and spoiled diary products.

Todd goes to take off..

Todd: Besides if you don’t come how will I ever know if Shaniqua has a cunt like a bucket.

Todd: (Shouting back) The more it annoys you the more I say it… 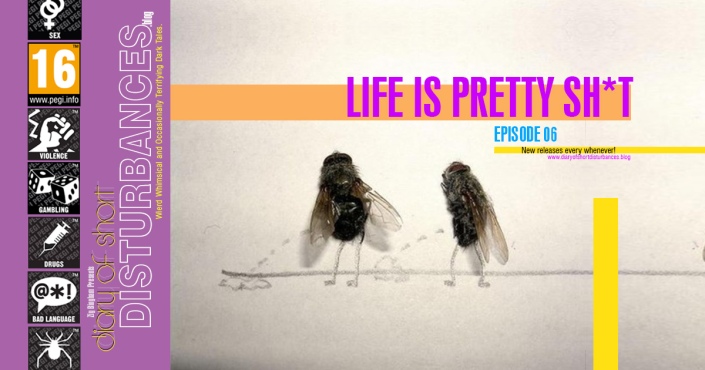