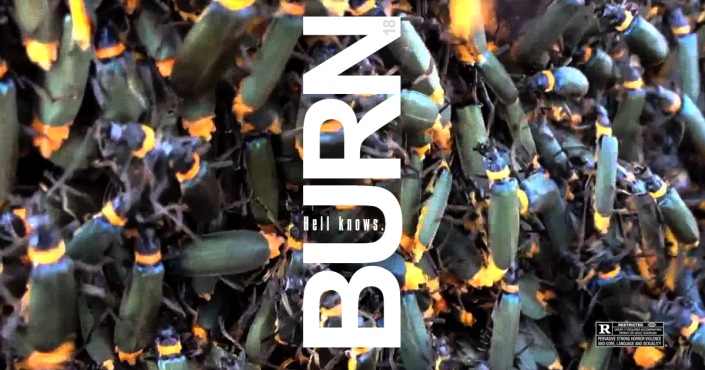 INT. THE COTTAGE – KITCHEN – NEAR DAWN

WE HEAR a tip-tap on the windows. Slight at first then it increases. Kimmi edges towards the windows and sees that it’s moths and the occasional beetle.

The tapping get’s louder until it’s a torrent desperately banging at the window to get in.

LILITH
Both of you check that all the windows are shut.

Mickey is totally spent but he gets up – his body objecting. Lilith and Kimmi run around the cottage looking for open windows.

Most are already smashed.

They start covering the windows with pictures, tea trays, bits of wood. All with generous amounts of gaffer tape and nails.

Kimmi looks at the light from under the back door. thousands of tiny shadows dart around. Tiny beetle legs reach under the door only to be snapped up by one of the cats.

Kimmi gets some towels and rolls them up blocking out the draft and bugs.

Kimmi does the towel trick on the front door, but the bugs are pushing the towel away. She grabs the duck tape and tapes the towel down to the stone floor and that does the trick… almost.

One of the cracked windows is pelted with a thousand insects sounding like the hail stones made of soft centered candy. The cascade increases until the window explodes sending shards and bugs into room – a black cloud swirling hunting.

The bugs bite exposed flesh. Nibbling away like tiny slow eating piranha. Lilith kicks over the table slides it against the door and Mickey crawls over and opens the hatch.

Inside is a grow room barely big enough for two people and full of maturing dope plants.

Lilith half climbs in and removes the plants and throws them into a corner.

For a moment lamenting the loss.

Now with the grow room empty Lilith and Kimmi climb in and there’s barely any room left but there is enough.

The bugs start swarming over Mickey and chewing on his flesh. He reaches for the nearest cat and throws it into the pit.

LILITH
I got a plan.
MICKEY
I know.

Mickey takes one last look at Lilith and slams the trap door shut, he throws a cabinet down over the hatch – sealing it.

Mickey pushes through the cloud and opens the oven. And switches on the gas.

Not much energy left he slumps to the ground and the bugs consume him in a cloud of black and blood. The other cat is being overwhelmed by the bugs it scratches and the bug are devouring the poor thing.

Mickey grabs the cat and tucks it under his blanket.

The front door opens and through it steps Lucia the insect clouds making way for her honouring her statue as lord of flies.

She reaches out and caresses Mickeys face.

INT. THE COTTAGE – CONTINUOUS
Lucia removes her hand from Mickey’s face and pulls the blanket from him revealing that he is now sitting back in the chair but still in the cottage now free of bugs, bound as we first met him.

She lets the cat run away a moment before grabbing it and looks deep into it’s eyes.
It hisses at her.

She then drops it allowing it to escape.

She takes another look at Mickey.

He seems spent. Done. The fight all but gone.

Frank looks on bleeding out from his wounds. Undead. Nearly dead. Standing motionless in the corner of the room.

LUCIA
You know I missed this. You tied to a chair.

LUCIA (CONT’D)
…all beaten and helpless…

Mickey tries to look away.

LUCIA (CONT’D)
Reminds me of the old days. Of Spain. You remember Spain? We fucked for days you and I.

She straddles Mickey and grabs his hair snapping back his head.

LUCIA (CONT’D)
You made my little cunt so wet. You remember?

She lifts her skirt and rubs herself into his groin.

She licks the sweat of his neck and savours it’s taste.

Mickey tries to pull away but Lucia and his bonds have him tight.

LUCIA (CONT’D)
Alas… no time for play. Where’s the girl? Where’s my little girl?
MICKEY
Your girl?
LUCIA
Yes. She belongs to me. Like your heart belongs to me.

LUCIA (CONT’D)
We had a deal. You and I.
MICKEY
We didn’t pinky swear.

She grinds into his lap.

LUCIA
I think you find that’s exactly what we did.

She squeezes his throat and pulls a switch blade from her garter. Flicks it open.

Micky groans in pain. Lucia feigns like she’s listening but she’s not interested and whilst still holding Mickey by the throat she moves the knife to his eye.

LUCIA (CONT’D)
Where is she? Is she in here?

Slowly she moves the knife closer and closer.

She holds Mickey’s head with her inhuman strength and positions the knife a few centimetres from his right eyeball.

Then as she switches eyes…

Then she pulls the knife away for a moment.

LUCIA (CONT’D)
It’ll be a shame to split the pair up they are so pretty.

She pushes Mickeys legs open a little more and puts her hand on his member.

LUCIA (CONT’D)
oh why so shy? Would you like a heater?
LUCIA (CONT’D)
Shh.
MICKEY
Stop. Stop.
LUCIA
What is it honey?
MICKEY
Please don’t.
LUCIA
Then tell me where she is?

She moves in closer. He is clearly struggling, but he’s close to giving the girl up. She kneels in front of him as if she’s going to give him a Blow job. She plays with his penis and balls.

Impatient she stabs the switchblade into one of his balls. WE HEAR it thud through flesh into wood.

He screams an unbelievable howl.

Blood spurts over her chest.

She runs her finger over the red line and licks Mickeys obscene come off the finger.

She gets up and walks away before realising that she’s forgotten something.

Back to Mickey, She pulls out the blade and he howls even louder as blood spurts out in a crimson fountain.

He is is so much pain he can barely scream

Out of the darkness Frank moves, but Lucia motions him to stay put.

LUCIA (CONT’D)
Where is she? It’s ok lover. You can tell me.

and lifts the zippo.

Back in the kitchen, in the chaos in the real world bugs flying all around and Mickey ignites the lighter.

and the cottage is destroyed in a ball of fire.