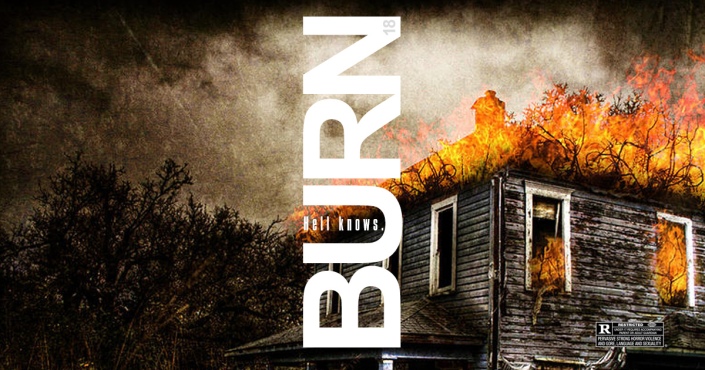 INT. THE COTTAGE – DAWN
The smouldering remains of the cottage are turned by the bare white foot. We pulls out see that Lucia is alone in the wreckage.
She throws bits of the broken cottage aside to reveal the tiny hatch.

After a moment she recomposes herself.

LUCIA
Well it was fun while it lasted.

Lucia turns around to see Frank trying to get up – fascinated by his strength.
She doesn’t help closing her eyes and turning to feel the morning sun against her face and skin. Frank makes it up but keeps his distance from the pale woman.

Lucia doesn’t break her stance instead she continues to soak up the Rays.

LUCIA
I don’t know. It wasn’t me that had a hold over you.
FRANK
Will I be damned for this?

She smiles.
Frank walks off into the rising sun leaving Lucia alone with her thoughts in the cottage. He collapses not 10 metres later.

Lucia goes to leave but finds she can’t.

Something blocking her. Something unseen.

She tries another way out and she can’t. She is blocked – trapped in an invisible cage.

She looks about and sees now in the sunlight that the road doesn’t end at the cottage the lines of the old roman road continue under the crop field into the trees. Off to the North and south the landscape reveals old train tracks.

She is literally at a cross roads.

LILITH
This used to be an old station masters cottage, before the railway got tore up. Before that some say it was use to drive cattle to market. If you look over there you can see where the old Roman road goes through the dark woods. Locals say they are haunted. Nonsense obviously.

Lilith stands on just outside the tumbled down borders of the cottage.

Lucia charges at Lilith but bounces off the invisible wall, furious.

LILITH
Why are you so grumpy? It’s my place that’s been destroyed.
LUCIA
This won’t hold me long sister.
LILITH
Long enough.

The two consider each other for a while.

LILITH (CONT’D)
The lack of penis suits you Lucia.
LUCIA
You look fat and old Lilith.
LILITH
Really? I like my hips. These used to be all the rage. You girl are all skin and bone. Maybe if you tried letting time touch you a little you might grow up a little.

LUCIA
What do you want?
LILITH
Return the man.
LUCIA
Give me the girl.

LILITH
And here we are again, Sister always fighting.

The word sister is said with such spite.

LUCIA
Why do you always take his side? You were the first wife.
LILITH
You were his favourite.
LUCIA
They call you devourer of babies.
LILITH
They say a lot of things.
LUCIA
It doesn’t bother you?
LILITH
I don’t think about it.
LUCIA
You’re such a daddy’s girl.
LILITH
You were always so easy to fool. Hubris is one of your more predictable vices.
LUCIA
Superiority yours.

LILITH
What is this really all about, Lou?
LUCIA
What is it always about?
LILITH
Still trying to get the old mans attention? When will you learn? He isn’t listening.
LUCIA
If I had the girl he would hear me. I would eat her soul and then he’d have to face me.
LILITH
Oh Grow up! How can you of all creatures not understand? We’ve been abandoned there’s no-one listening. For all your whispering and nudging what have you  achieved… Nothing! You kid yourself that you’ve had an impact. Fucked with his divine plan. Well you know what? They never was a divine plan. It’s all a blag. A lie .He’s gone honey. Packed his bags and started a new family and left us to fend for ourselves. There’s no-one in heaven.
LUCIA
Liar!
LILITH
When was the last time you saw an angel? Or witnessed a true goddamn miracle?

LILITH (CONT’D)
Go on call him.
LUCIA
(Shouting at the sky)
Where are you father? Why don’t you answer me? All the rages I have caused. The horrors I have brought. Surely I deserve an answer… I deserve your wrath.

The silence is deafening.

LUCIA (CONT’D)
(shouting at the sky)
FUCK YOU!

Lucia throws another hissy fit and breaks down.

LILITH
I’m telling you. No-ones listening.
LILITH (CONT’D)
You wanna see?
LUCIA
I can’t
LILITH
Why not?
LUCIA
You know why. Not allowed.
LILITH
One of the things I like when the flesh ages is how it gives you perspective.

LILITH (CONT’D)
Have you actually tried to visit lately? I’m telling you no-ones home. You don’t believe me. Why don’t we go and have a look?

Lilith reaches out stepping through the invisible cell walls and embraces Lucia.

Lucia struggles against the embrace but Lilith holds on tight.

And with a bright white flash…

For a moment all is still.

Mickey’s charred body in the corner of the room. The sun rising on the horizon.

Out of the priest hole/grow room climbs Kimi.

She Rises out of the ashes and looks around her. Out of the hole and around her feet Henry the cat joins her. He wanders over the charred remains of Mickey and waits for Kimi to join him.

Kimi looks down at the corpse.

For a moment she considers him.

Then slowly, she kneels down before him and kisses his lips.

For a moment. Nothing

Kimi takes her finger and wipes across Mickey’s lips where she kissed.

Almost imperceptibly, a solitary flake of black ash falls away from his lips followed by another and then another revealing fresh flesh beneath.

Slowly the dead black skin falls away from his head and his upper torso cascading wave of black revealing the living skin of Mickey.

As the black flakes pass Mickeys heart and lungs he takes in a sharp breathe which pushes the wave of falling dead skin along to the rest of his body.

He takes another breathe.

And another and now with the life back in him and with the look of pure disbelief on his face he looks up.

Above him stands Kimi.

A halo of light behind her, hand out stretched awaiting his.