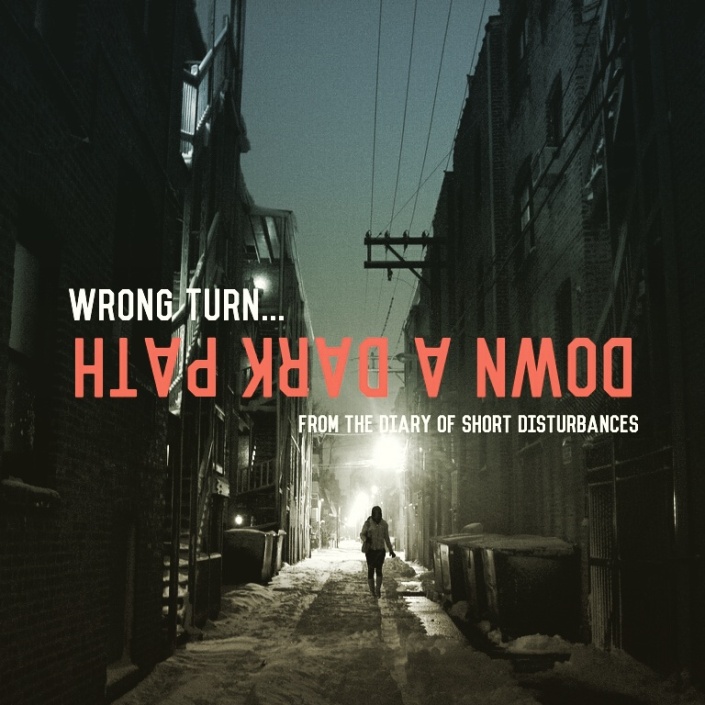 Dark Horror/Thriller about two young men who’s party  takes a turn for the worse when they end up in the wrong alley at the wrong time and do the wrong thing.

A movie script/story work in progress. New releases every Wednesday.

Click here to Read the Introduction/Preface or Scroll on…

DOWN A DARK PATH

A Work in Progress.  First Draft Released as Written Every Wednesday.

POV of someone looking at his own feet.

And for a while that’s all we see.

INT. THE DARK APARTMENT – DAY
POV of the feet.

Occasionally the owner looks up enough to see the girl over the sink, her hands soaking in the sink far across the room.

EXT. THE DARK APARTMENT – DAY
POV. She looks at us for a while before slowly making her way over and we look away. The heavy hum of a dying air-con unit increases mechanical breathing echoing the claustrophobic camera work.

She is half hidden in the shadows but we see her legs as she walks towards us then stops unsure where our personal space begins and ends.

She keeps her distance a little.

Unsure how to play this.

Waiting for us to look up.

Eventually we do and we see that the young woman, May has been crying.

MONTAGE.
The couple’s love making gets more intense. More passionate. The camerawork reveals the tenderness and love between the two rather than the act.

INT. THE DARK APARTMENT – DAY
POV.
MAY holds herself in a way that belies her 18 years but shows that she really cares for us.

But we are passengers in someone else’s trip and he can’t see that right now.

She wipes the tears way and bends down.

We can’t yet hear what she is saying but along with the air -con seeming getting louder as we hear our own breathing and heart beat. Nervous. Unsure.

MONTAGE.
A young woman’s hand reaches out and slides down the young man’s abs and down to his crotch.

He is nervous. She his rock.

Both set of lips breathe into each other barely touching in anticipation of the woman’s cool grip.

INT. THE DARK APARTMENT – DAY
No longer in POV we assume the view of spectator and we now see May trying to reconnect with the 20 year old TOMMY.

He looks down at his feet unable to look up.

She removes her hand and for a moment she crouches there.

For a moment we cut back to Tommy’s POV still looking down he is too ashamed to look at her.

MONTAGE.
The passion and heat rises. She giggles. He acts macho and grabs her in tight.
She starts to stroke him.

He grabs her throat and she responds like it’s the greatest thing in the world.

INT. THE DARK APARTMENT – DAY.
She pulls away and walks around the dark apartment collecting her shit.
Tommy looks on making no effort to seal the breach between them.

MAY
I guess I’ll see you at the party?

MONTAGE.
She stops and the passion evaporates.

Who is the more embarrassed is hard to tell.

But she is sympathetic.

She leans in and tries again to ignite his flame, but he pushes her away.

MAY
I love you baby.

And we still say nothing.

We just look away.

To the corner of the room.

To the corner of this Dark apartment.

And she is gone.

And we are alone.

Except for the dark corner.

MONTAGE.
CU of the Tommy’s eyes staring into the corner of the room.

MAY
I love you baby.

The kid gets up and pushes past May and walks toward the corner.

INT. THE DARK APARTMENT – DAY
As he walks we now CUT from the our POV to a WIDE of an empty room and the Kid as he slowly approaches the corner of the room.

WE SEE that we are in fact in a POV of the dark corner. We are the eyes hidden in the dark.

MONTAGE.
WIDE ON the young man walking away from the bed, her hand tries to stop him but he keeps moving, pulling away.

INT. THE DARK APARTMENT – DAY
He approaches the dark corner.

The time it takes is uncomfortable.

He looks right at us, into us.

But still it takes too long.

And he creeps toward us until he is close enough to reach out and touch the screen from the inside, the divide between us and him.

He reaches out to touch us…

MONTAGE.
She gently kisses him. Trying to make him better.

The kisses are of love.

But he doesn’t see that, he just see’s something in the corner of the room.

And then it’s gone.

And from our vantage point we observe.

For far too long.

TITLES: Down a Dark Path.